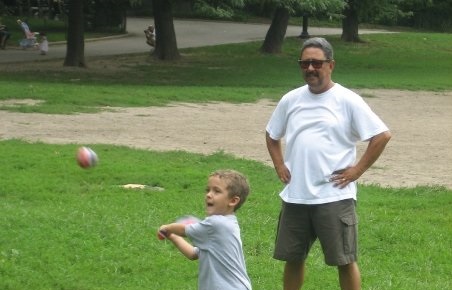 I am my father’s son.

Yes, that’s an obvious statement, but it recently hit me just how true that is. It took me this long because, as you likely know by now, I am the black sheep of our family.

Your Tata is a self-made man. He came from very humble beginnings in Tucson, Arizona, and worked hard and earned his way up the ladder until he came to a place that he could start his own business. Then opened a second business. Then a third. And all the while he has maintained the hard-working, you-earn-what-you-work-for attitude that brought him his success. His passion rubbed off on others, and my brother and I, and my cousins as well, all learned the benefits of a proactive mindset.

Now, your Uncle T.j., your Aunt Debbie, my cousin Michael John, and several other family members or family friends work for, or have worked for, your Tata at some point, including me…well, for a little while.

That’s where I’m the black sheep. Although I did learn the lesson of proactivity, I took it a completely different direction. I did not go to a state school to learn engineering or sales or something that would have helped me join my father’s business…no, I earned a degree in ministry with an emphasis in preaching…and became a youth pastor.

For years, I thought that this meant I had not taken after your Tata, that although he taught me many wonderful lessons, at the end of the day, I was very different from him.

Or so I thought.

But, something I had never really considered was what your Tata does with his spare time. He is (well, right now. Who knows if he’ll still be doing this when you’re reading this letter) a coach for a club baseball team of 13-14 year olds in the Babe Ruth League, called the “Huskies”. He doesn’t just do this for fun, and he doesn’t just do this to win (though he does that, a lot), he does this because he has a passion to teach, encourage, build, and train teen boys to become young men. He has done this so successfully, that he was recently recognized by the Sports Hall of Fame in Chandler, Arizona (where I grew up and he still lives).

“But, Tony Valdez as a person and coach is more than about winning baseball games. The boys who have played, and some of them right here [also being inducted to the Chandler Sports Hall of Fame], will tell you they have learned lessons that will last them a lifetime, such as discipline, loyalty, commitment, self-sacrifice, to respect one another, to respect the game, that team comes first and not you as an individual. His players were taught how to handle adversity, to compete, to challenge themselves to be the best they can be. Young boys have become young men under his guidance.”

For so long, I have made the mistake that so many Americans make: I judged a man by his profession. I spent so long looking at how your Tata spent his work life, that I had almost completely missed what he had been doing for years in his free time.

He was a role model, a teacher, and a mentor to teens, in a time of life when that is desperately needed.

He has stories of men coming to him, years after he coached them, and thanking him for the lessons he taught them. He has built and maintained relationships with some of these men for more than a decade. He, to this day, continues to receive gifts, thank you notes, tokens of appreciation, and more, from appreciative players or parents. Young boys have become young men under his guidance.

I don’t know what job I’ll be doing when you read this, but right now, I am a youth pastor. I am a mentor, role model, and teacher to teens. I build and maintain relationships that last over years to help encourage students to rely on Christ to get through a difficult time of life. Although your Tata does it through baseball and I through my ministry, I have taken after my father more than I ever realized.

And I have to admit, I am proud to say that I take after that man.

Someday, you may look back and think that you are nothing like me. You may think that we could not be more different. Maybe you’re an introvert that prefers fishing to reading. Maybe you’ll be a trendy kid that isn’t really into nerdy things. Maybe you’ll have no interest going into vocational ministry or in public speaking. Whatever it is, I hope that in some way, you have taken after me. I hope that I can pass on to you some of the things I’m passionate about, some of the things that are important to me. It may be in a way that I never considered, but I hope you grow some of the seeds I hope to plant in you.

And, when you see the way you have taken after me, I pray that you’re as proud as I was this weekend, watching my father be honored.

But, even if you don’t really take after me, I want all three of you to know that I love you, exactly as you are.