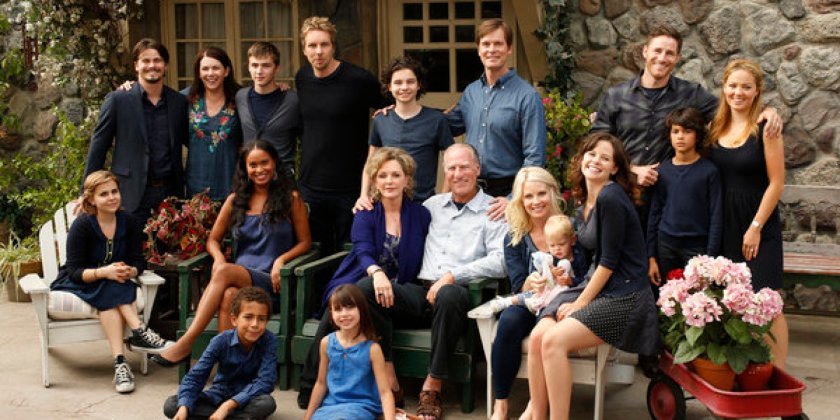 We flew back to Arizona this past weekend. It was a great trip, punctuated by a family get together that included your three cousins. For a brief moment I felt a pang of guilt that we’ve made the decision to raise you so far from your cousins and grandparents. But then, I walked outside into what should have been the gentle arms of October and nearly burned my face off. It was 98 degrees, on average, this weekend. In October. In all seriousness, I don’t regret for a second making Seattle our long term home. It was the right decision for our little family. Even so, I miss our family like crazy but am grateful that we all make the most of these fleeting weekends together…

Speaking of families, there’s a great show on NBC called “Parenthood”. The show intimately chronicles the lives of the Braverman family as they traverse their way through the ups and downs of everyday life. The writers nail the portrayal of everyday life. There’s no character grandstanding or overwrought dialogue. The Braverman’s are a very REAL family with REAL triumphs and REAL failures. That’s why they feel so relatable to the viewer. I can’t overstate how hard that is to do with a T.V. show.

I watched the second episode of the 6th and final season last night and something terrible finally happened. There was a false moment on the show. I had a mini-meltdown over it. It pissed me off to no end. Here’s what happened: Sarah Braverman has two kids. Their names are Drew and Amber. Sarah was the requisite screw-up of the Braverman kids. Got pregnant young and ran off with a musician who turned out to be a loser/absentee father. Her kids have had a rough go of it because of her decisions but they’ve waded through the crap and are now leading productive lives. We find out that Amber’s life(mind you she’s 22-years-old I believe) has gotten more complicated. She’s pregnant from a relationship now broken.

Amber tearfully tells her Mom about the pregnancy and is met with the coldest response imaginable. All Sarah can muster is a dead-eyed look of disbelief and disappointment. She says”Oh” and then awkwardly asks “How?”. “With a penis and a vagina, you idiot!”, is what I wanted to yell at the T.V. Give your daughter a reassuring hug! Tell her that you’re shocked too but that everything is going to be okay. Sarah’s response was horrible. It wasn’t real and completely violated the spirit of the show. Her character tries to walk back her reaction later in the episode but then she just ends up lecturing her on how hard raising a child alone can be.File that under “No Shit Sherlock” and tally up one more false moment for the episode. The show closes with Sarah bringing over a picture book of Amber as a child, telling her that she forgot to tell her about all the good stuff that comes along with being a parent. Too little, too late Sarah Braverman.

This moment in the show got me thinking how I want to parent you. I’m going to be tough on you and expect that you keep your standards high throughout all aspects of your life. You’re gonna screw up though. It’s inevitable. It might not be an unwanted pregnancy but it might be something just as impactful. I don’t expect it to ever be easy for you to come to me or your Mom with bad news. Actually, I hope it will be the hardest thing you ever do. Not because of our lofty standards but because of the ones you’ve set for yourself. What you can expect from us is that there will be immediate support and reassurance. We might be disappointed but that feeling will never triumph or linger. The lectures will come and they will be swift and sometimes brutal. But I can promise you the hugs will always come first.

BTW, this happened while we were in Phoenix. Chills for days: