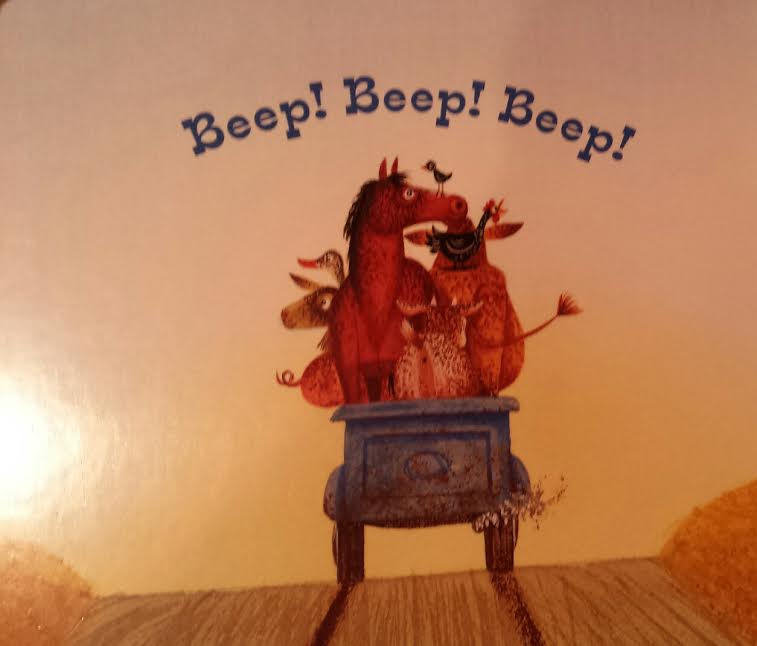 Little Blue Truck is a charming kids book. It tells the sweet story of a diminutive blue truck that joins forces with a merry bunch of animal friends to save a big dump truck when said dump truck gets stuck in a mud pit. The book’s greatest strength is that it delivers a powerful message about friendship in a simple way. Little Blue Truck is also flush with sharply detailed and whimsical illustrations. You love this book. You bring it to me constantly in what has become a daily ritual. I’m thrilled that you like for me to read to you and I’m heartened by the fact that you are more engaged by books than electronics. But Malin, you need to find a different book because I HATE THE LITTLE BLUE TRUCK. I can’t read it to you anymore. Tonight I read it to you six times. The sixth time was especially brutal. I’ve nearly memorized the whole book so I was in cruise control on the last go round. I vocalized it to you but my heart and mind were elsewhere. I took the Little Blue Truck to a dark place and I’m sorry to say, he’s not coming back. Here’s how that story went:

Little Blue Truck came down the road
Blue should have said “Beep!” to warn the Toad
but instead he killed his lights, idled his engine
and went just fast enough to make the Toad go “Splat!”

Little Blue Truck continued rolling by
as did the Toad’s now dislodged eye.

Little Blue Truck passed the horse and the sheep
the pig, the duck, the chicken and the goat.
They all smiled and waved while his mind went somewhere depraved.

The truth is, Little Blue Truck had given up long ago.
His truck wife was openly sleeping with her Yoga instructor,
a handsome Camaro named Gordon. Little Blue’s son, Stephen, had recently
chosen Ballet over Football. Little Blue blamed himself. In an effort to appear progressive,
he pushed his wife to spell their son’s name with a “ph” instead of the traditional and masculine “v”.
Ballet is the consequence of that decision, Little Blue Truck thought to himself.

Back on the road, a big dump truck cut him off, causing him to swerve
and almost hit a tree. He cursed at him under his breath but didn’t make a scene
because he saw the license plate that said LVMYAK47 and a bumper sticker that read
“FOX NEWS IS MY TRUTH”. He continued his journey and a few miles later
he found the big dump truck stuck in a dangerous, deep mud pit.
The big dump truck was in danger of drowning in the mud.

Little Blue Truck had an idea. He went down to the local rock quarry and filled his bed
with heavy chunks of rock. He went back to the big dump truck, looked around for witnesses
and began to fill the dump truck’s bed with the rock. He took two more trips and felt satisfied.
He opened up a bottle of whisky that was stashed in his glove compartment and contentedly watched
as the dump truck disappeared from view.

On his way home, he passed the same group of animals and they asked him for a ride to their
respective houses. He obliged and set off to take them home. The Horse noticed the bits of
rock that had chipped off from a few of the larger stones from the quarry. Horse casually
asked Little Blue Truck if he’d been doing a landscaping project. Dammit, thought Blue.
Now there are witnesses. Little Blue Truck sped off into the direction of the nearest cliff,
had one last thought that he was a Thelma without a Louise, and flew off the edge,
screaming animals in tow.

Malin, thank you for permitting me this irrational vent session. Acting irrational is bound to happen from time to time. When it does happen, remember to remain lighthearted about it. When your thoughts become clear again, irrationality often brings levity to a situation that was otherwise lacking it. I can’t wait to read with you tomorrow and the next day.