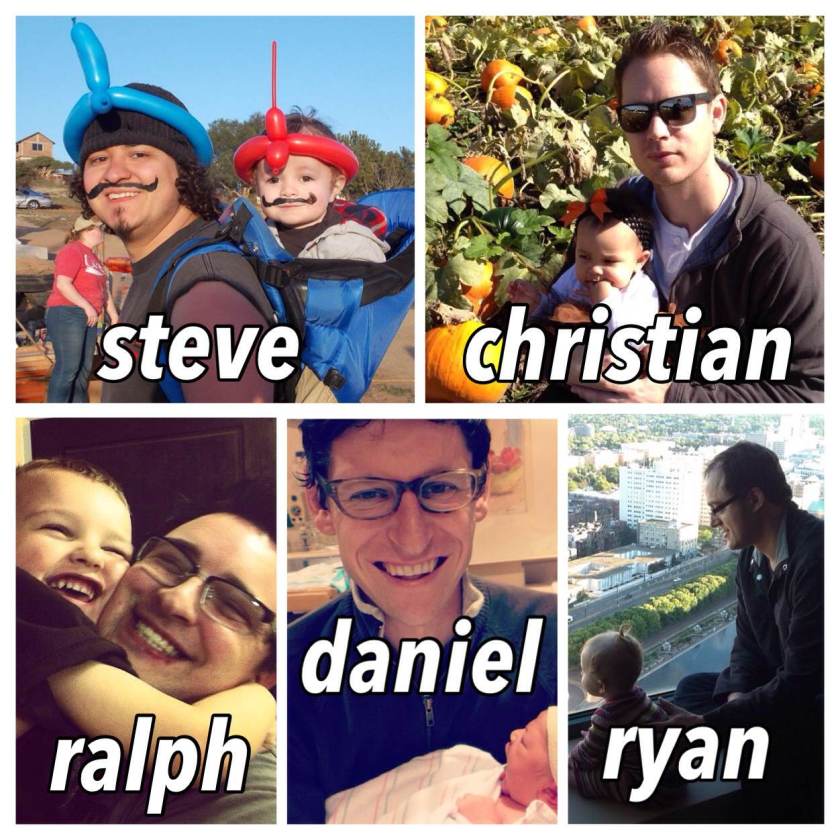 Christian Lindvall: What actor would you all most want to post on our blog?

Steve Valdez: Brendan Fraser. He’s supposed to be a super cool guy and a great dad… and he sort of acts sometimes.

Ralph Amsden: Brendan Fraser is such a bad actor, but a hard guy to not like.

Daniel Zehring: I’d read Lewis’ letter on our blog. What about John Stamos as Jessie Katsopolis?

RA: Maybe Brad Pitt just to see if he knows all his kids’ names?

CL: Maybe Pitt just calls them by the country they’re adopted from.

RA: That would be incredible if it were true. Also, it would be great if he called Angelina Mrs. Smith.

Ryan Eland: I thought we were doing this by video chat tonight? I’m all dressed up and everything. You guys are missing out.

RA: I guess I’ll kick this thing off. What made you want to contribute to The Dad Letters? What are your thoughts on the concept, and what do you hope to get out of it?

SV: I’ll be honest, I was truly honored to be asked at all. I had been reading The Dad Letters site for a while and loving it. So when you asked, I definitely wanted to be a part of it. Also, I like to write.

CL: I loved the idea of creating a continuous love letter to my daughter Malin. It turns out it’s become where I’ve found my voice as a parent., and on some level, I even think it might be the best representation of me as a human being.

SV: As far as the concept goes, I have an awful memory, so to be able to communicate to my kids what I’m thinking about as I think about it means the world.

DZ: I joined up because I had read a few of Ralph’s letters and many of them were hilarious. Sure, I have yet to get myself stranded on my roof or flipped off by my own offspring, but I loved the idea of having an opportunity to capture great moments in parenting as my life unfolds with my wife and my kids.

RA: I’ve always been astonished at how little gets passed on from generation to generation. Most people die with a little bit of money and some trinkets that get dispersed amongst their kin. I wish I had words on a page from my parents, or their parents or theirs. I think anyone would want an honest look at where they come from.

RE: I think I just had lots I wanted to say to Adeline initially. It was a way for me to not only explore my own thoughts but give something to her as well.

RA: How have people reacted to your posts on The Dad Letters so far?

SV: My letter to Audrey Rae about my Nana was actually read at her funeral. I was honored to have that happen.

DZ: That letter was something special, Steve.

SV: Yeah, my brother did the eulogy and read the letter during it.

RE: I love it when people comment. It’s strange sometimes, you pour your heart out in a post which creates intense “conversations” with people I don’t really know.

CL: The commentary by perfect strangers on a few posts has been really gratifying. Particularly on my post “Owen and Haatchi“. The story, for various reasons, meant so much to me and I’m thrilled I spread their word, so to speak.      And Steve, that is amazing.

DZ: For me, I have been surprised at how many different types of people are reading it. However, I haven’t sparked too many conversations that I know of. In sense, that has been freeing to me in being able to focus on a message to my kids and not worry about the extra peering in on the screen.

RE: I find that a constant struggle Daniel – I always check myself with “what do I really want to say” to my daughter. It’s so easy to think of all the people who are reading and to write to them instead of writing to Adeline.

SV: It’s definitely tough to have that balance. There are even letters that I’ve written and decided “no one but my kids will care about this,” so I’ve just set them aside.

CL: Good point, Daniel. Sometimes, I feel my self straying from writing just for Malin and have to get back on course.

SV: I’m always astonished to see where are readers are from. There’s that area on WordPress that shows where your readers are, and seeing that we’re being read worldwide is incredible.

RA: One of the biggest struggles I have is reading your letters, totally getting lost in the quality and honesty, and then feeling like I might not be able to match it. Are there any challenges like that you have faced since this all started?

RE: Ralph, it’s super challenging not to compare…      I read your letters and get insecure sometimes about how hilarious you are.

SV: No joke. I will often read your guys’ stuff and wonder if I’m really on par with you.

RA: Steve, you’re below par. Now have fun figuring out if that’s a compliment.

CL: It sounds silly but I’m mentally exhausted after writing a letter because the quality bar is set so high.

RA: That’s funny you brought up the exhaustion. I talked to Ryan about that on the phone. Sometimes you need a couple recovery days.

RE: That is what has surprised me the most about blogging…how much you put yourself out there…how tiring it is emotionally. Here’s a fun question: What was your most mentally and emotionally exhausting letter to write?

DZ: “Problem Defined” was a big one for me. It took a long time to sort through what was at the center of it. It was great to look back and gain some inspiration from the amazing moments I’ve had in the classroom.

CL: For me, it was “Baby #2? At Least For Now, No thanks.” To write about the realization that we might be too selfish to give Malin a sibling was tough.

CL: That letter inspired mine, in a way.

DZ: Christian’s was great because the number of kids is replaceable. It is really about the tremendous sacrifice it takes to have a kid. It made me remember one of his first posts, “Priviledge>Hard Work.” The sentiments are opposite and simultaneously totally true.

SV: I don’t know if I’ll ever post them, but I have more than one letter that has “and I write this through tears” or “as I write this, there are tears streaming down my face.”  It can definitely be emotional. See my letter, “I Have Something in My Eye.”

RA: Speaking of others’ posts, which ones have impacted you in some way, and how?

RE: Ralph’s “Revenge” actually inspired me. It was obviously hilarious, but there was a rawness to it that was incredible.

RA: Daniel’s “How to Handle the Road” stood out to me as something that will be really important to his kids. We’re all getting older and more boring. Daniel’s kids will probably be astonished that he lived the rock n’ roll life when they’re old enough to comprehend these letters.

DZ: I don’t think my kids will believe it for a second.

RA: Steve’s letter to his Nana felt private. It really hit the mark of what we’re trying to do. I felt privileged to read it, and a little uncomfortable, which is exactly what it feels like to be moved.

SV: I felt that way about Ashes, Ralph. It was so genuine that I felt like I was a part of the event.

RA: When Ryan ended his post “Wounds of Connectivity” by saying he was cutting his post short to play with his daughter I almost cheered, because I know how odd it is that we’re trying to give something valuable to our kids through this site, but we might be missing out on some play time.

SV: That one reminded me that we don’t have to be so serious all of the time. It was beautiful in it’s simplicity.

RA: Everything Christian does makes me feel uncomfortable, so there’s that. Sometimes I read down the margin just to make sure there’s no hidden penis jokes.

CL: You just gave me an idea!!! Hahaha. I loved “A Heart Condition,” because it was a snapshot into what I likely will go through myself          .

DZ: I love it when Ralph, Ryan, and Christian put on their societal critic pants and take on the headlines. Bullying, Princesses, Ban Bossy, and Hygiene? That stuff is great.

RE: Lol… that is guilty pleasure stuff for me.

SV: I agree, Daniel. Not only is it a great message for the kids, but it also kind of takes a snapshot of what life is like now.

CL: I have to say the bits of your guys’ faith that permeate each of your letters, both big and small, has blown me away, because it is very real and not at all “religious.” It kind of stuns me sometimes.

RE: That’s really cool Christian. Thanks for that.

DZ: Indeed Christian, it is inspiring to hear. I think the authenticity that each of us arrives at is what drives that whole thing. Everyone brings something real to the table. That is the best we have to offer.

RE: What else stand’s out about each others’ writing styles?

RE: I admire Daniel’s endeavors to bring the abstract into clarity.

CL: Steve’s heart, which is on display in each of his letters.

RE: Ditto on Steve.

RA: Steve really likes his kids. Like he’s not even faking it.

CL: On a nerd level, Ryan’s command of every sentence is incredible.

DZ: When I called Steve simple, I meant that he was stupid.

DZ: I agree with Christian on Ralph.

CL: I meant that you can write about anything.

RE: I love Ralph’s ear for snarkiness and self depreciation that doesn’t come across disingenuous.

SV: Christian: The blunt honesty. You don’t want to hide anything from your little girl, and I really respect that. Ralph: How easily you bring the reader into your own life. I feel like a family member when I read your letters. Ryan: In a group of writers, you still have a way with words. I envy your style. Daniel: No topic too small. You want to communicate everything important to you.

RE: I also appreciate Christian’s long form paragraphs. It’s not classic web writing, there is an old school element to it that is very cool.

DZ: Is the web old enough have “classic” anything?

RA: How are the wives handling your massive success as “dad bloggers?”

SV: I’ll let you know after I get famous.

DZ: Laura has read about 50% of mine. She’s not impressed. That why she’s perfect for me.

CL: I think Ligaya is proud of the love that pours out in each letter, but also slightly uncomfortable with all of my boner jokes.

RE: Tara is slowly adjusting to all of the cocaine.

DZ: Make sure the cocaine and boner jokes stay in the letter Ralph.

RA: Will do. I’m calling it a night guys. Much love, and many many many many thanks for taking on this project with me. Your time and energy is worth more to me than gold. I can’t thank you all enough.

DZ: Seriously, I’ve never looked forward to a challenge week in and week out as much as this one. It’s a blast to be a part of it with you all.

Thanks from all of us for reading and supporting what we do here. We’re always looking for guest dads to post letters, e-mail the guys inquiries, questions, comments, or any other feedback to TheDadLetters@gmail.com.