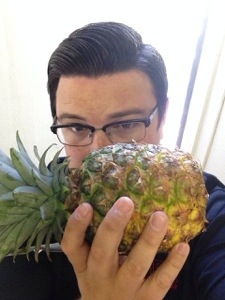 In 4th grade I had a teacher named Mr. Stanton. On the first day of school he introduced himself, talked a bit about his personal interests, then told the students he hated the color purple. For some reason, we clung to that last little morsel of information. We gave him purple balloons on his birthday, completed our assignments with purple ink, and wore the electric purple tank tops that only exist in fond tales of early ’90s fashion folklore. We weren’t antagonizing him out of spite, it was out of comfort and appreciation. Mr. Stanton was a good teacher who created an environment where we felt safe enough to retain his lessons. I have wonderful memories of Mr. Stanton’s class, and decided to use his example when I became a teacher.

I told the kids that I hate pineapples.

I may have made a mistake. Scratch that. I definitely made a mistake. Looking back, I realize that Mr. Stanton may have actually had great fondness for the color purple… or maybe he was specifically referencing the movie “The Color Purple.” In any case, there’s no way he would have continued this from year to year if he knew he’d be inundated with the thing he hates most. I actually do hate pineapples. I revile, despise, loathe and curse their very existence on this planet. Things like walking into my classroom to see a pineapple on my desk, or having my classroom Scentsy bar replaced with pineapple scent have become recurring real-life nightmares.

Last week, former students made sure that on April Fools’ Day I received a lovely gift of a fresh pineapple, along with a can of pineapple juice. I would have thrown them away, but I wanted to avoid touching them. Leaving them in plain view was my first error. My second error was allowing my first class of the day to engage me in conversation about the devil fruit that sat upon my desktop.

We were two days into a week-long school-wide fundraiser. It was a change drive, the rules of which were simple– bring spare pennies on Monday, nickels on Tuesday, and so on. In order to meet the school’s goal of $555.55, each student would be responsible for contributing around two and a half dollars. If the school achieved its goal, our principal had pledged to kiss a live pig at the year-end luau. My first class of the day has 13 kids in it, so we set our goal at about $35. By Tuesday, April Fools’ Day, we had raised less than $3, most of which was rescued from the floorboards of my car. In the middle of me shaming my students over the amount they had brought in, one interrupted to ask “if we bring in the full amount, will you eat that pineapple?”

I responded without flinching, with hyperbolic gusto, “You’d have to bring in twice the suggested amount for me to even eat half that pineapple.”

Before I could re-think my statement, a devious unified chorus cried out “DEAL!”

I’m not one to go back on my word, and in this case, I hadn’t even intended to give these kids my word. Still, I wasn’t worried. Where were these 13 kids going to come up with $67 in three days? Moreover, if the actual fundraiser’s payoff wasn’t enough to motivate them to donate, why would me consuming a piece of dumpster fruit rile them up? My conceit led me to structuring the following deal:

My hubris was my undoing. I had been so sure of their failure that what happened over the next three days will haunt me forever.

My 13 vengeful 7th graders brought in nearly $150, raising far more as a class than the rest of the school combined, and I was left to honor my part of the deal. I had to eat an entire pineapple.

I’m not going to write about the absolute hell that was ingesting that nasty Hawaiian filth. I want to do my best to forget the texture-fueled gagging, the taste of sugary-bile mixed with ammonia, and the seemingly permanent acidic sting on my gums. *Shudders* Instead, I wrote this to point out what an incredible motivator doubt can be. As one of my students said, “Watching you do something you don’t like is fun, but the best thing about it is that you said we couldn’t do it.” 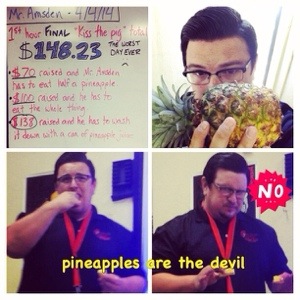 Part of me wants to tell them that I believe they’ll never get an ‘A’ on a test ever again and see if it has the same effect, but I really don’t feel like being forced to ingest something putrid just to get them to study harder.

There’s something rewarding about achieving an objective someone said you couldn’t. In fact, some people seem addicted to it. They’ll ignore a throng of encouraging voices and seek out one dissenting, doubtful voice, and use that as their motivation. Athletes. Entertainers (mostly rappers), business executives- many thrive on the idea that they accomplish what someone said they couldn’t. That’s not me, and I don’t really enjoy the idea of needing that type of crutch, but in case that describes any of you, let me do us both a favor.

I doubt that any of you will get into an ivy league school. Shoot, if you get a scholarship, I’ll even eat a pineapple.