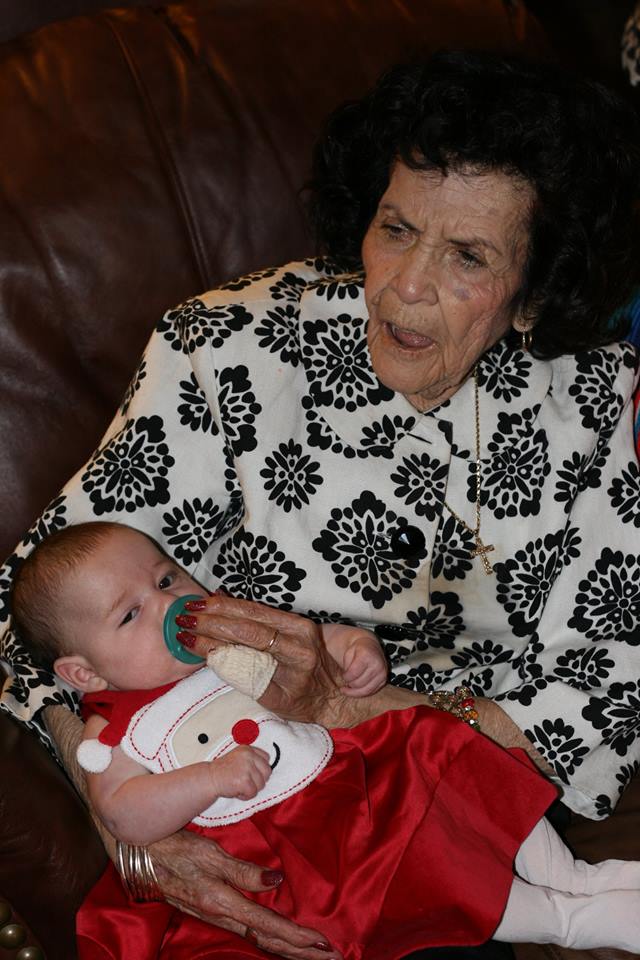 I want to tell you about a woman.

She was a fierce, energetic woman. She was stern, passionate, and was never short on words. She was small in stature but large in presence.

And she was my grandmother, affectionately known as “Nana”. 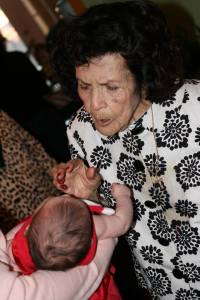 My Nana died yesterday. I am most certainly lamenting this, but not so much for her passing (she was weak and mentally faltering, it was her time), but because you will never really get to know the woman that I knew. The pictures you see here are of you and her on your first Christmas, years ago. You had the chance to see her a handful of times since then, but nothing that you’ll remember.

She certainly wasn’t the soft, knitting, grandmotherly figure that so many books and movies portray. There’s nothing wrong with that type of woman, but Nana would much sooner wield a crochet hook as something to throw at disobedient grandchildren than as a crafting tool. She may have been a homemaker, mother, wife, and grandmother, but this never stopped her from stern, solid action. I have as many memories of her with a paddle as I do of her with open arms (the paddle was mostly for my cousin, Bobby, not me…seriously!).

She cooked with lard. She cursed in Spanish. Even the dog was afraid of her.

And I deeply loved and respected her.

You see, Audrey Rae, she was a woman of action. It may not have been what you’d expect these days when you heard the phrase “woman of action”, but it was no less true. She wasn’t a go-getter businesswoman or climbing any corporate ladders, but that didn’t stop her from making an impact on the people around her. She showed her love actively, through five dollars bills she couldn’t afford to give me every time I visited, but gave me anyway; through allowing me to use the lemons from her tree to play baseball with; and, yes, even through much deserved discipline.

The reason I tell you this, my Raesin, is because she had a strength I want you to share. She was far from perfect, but she stood tall in who she was.

Well, as tall as a 4 foot something Mexican grandma can stand.

Stand tall in who you are, Audrey Rae. Don’t let people coddle you or underestimate you. Love those around you actively.

And don’t forget those who have come before you, even if you never really knew them.

I love you, sweetie.