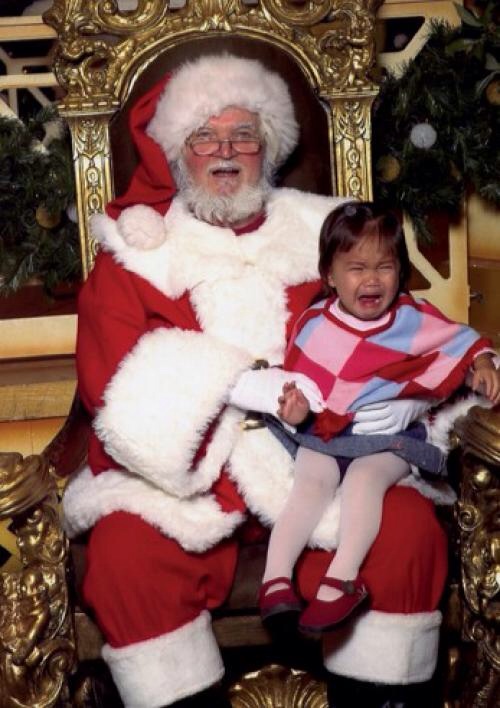 You went to see Santa Claus for the first time this past weekend. He’s currently the only bearded old man in a red jumpsuit that we’ve allowed you to get near. You sat on his lap, looked to us for a brief, panicky moment…and then you decided to act as you almost always do. You studied his face, found your security and then reached towards his beard. The lady snapped a few photos and we picked the one with you and Santa having a staring contest. It’s not a perfect picture but it perfectly captures who you are. Admittedly, your Mom and I were hoping you wouldn’t be so calm and collected for the photo. We wanted you to have a meltdown, for your face to be filled with fear and your screams of bloody murder to echo throughout Alderwood Mall. We wanted this because we think sick, twisted shit is funny. Especially pictures of kids on Santa’s lap, crying hysterically. You failed us though. Just remember, there’s always next year and we can’t have you disappoint us two years in a row.

In all seriousness, failure is going to be a big part of your life. That’s not to say that you should embrace it and make it a habit but you should try your damnedest to not fail at something more than once. You will, but the effort has to be there so you’re at least trying to learn from that first failure. On the other hand, some failures will be so embarrassing that you won’t ever repeat that failure again. Here’s a personal example; When I was in College, I worked part-time at Barnes and Noble. One night, I used the restroom on a fifteen minute break. I needed a place to sit down away from our break room so I figured one of the stalls would work well even if I wasn’t using it for its conventional purpose. Both the normal stall and the handicapped stall were open and I decided that I needed more space for my fifteen minute reprieve so I chose the handicapped stall. About five minutes in, I heard someone else enter the restroom. An odd squeaking sound started creeping my way and a few seconds later I noticed feet resting at the bottom of a wheelchair. I waited for a few minutes, barely breathing and desperately shooing the man away in my mind. The man held strong and eventually grew impatient, smacking the door with what sounded like a metal cane and asking me gruffly if I was almost done. I pretended to fumble with the toilet paper and flushed the toilet a couple of times before mustering the courage to leave the stall. I shoved my name badge in my pocket, quickly walked past the man ( who rightly called me an asshole) and then spent the last two hours of my shift hiding in various parts of the store so I didn’t run into him again. The point is, I’ve haven’t failed again to abide by the golden rule of not using the handicapped stall if you’re not handicapped.

Again, failure is inevitable and while I did say above to not embrace it and make it a habit, I also don’t want you to be afraid of it. This is especially so if you fail at things you’re passionate about. It’s such a tired cliche but always pick yourself up and try again. If you’re smart and dogged in your pursuits, I’m convinced you will be a smashing success in the phases of your life that you’re most passionate about. Your Mom and I will always be here to prop you up and give you a gentle or not so gentle push if that’s what you need from us. And if you ever want a crash course in the art of failing and succeeding, just pull up a chair and watch the utter futility of my efforts to win an argument with your mother.

Love you and Merry Christmas,