Today’s guest letter comes from Mike Zehring, brother of our very own Daniel Zehring. Mike might not be a dad himself, but he has a message for his nephews and niece about the legendary athletic prowess of the Zehring brothers. 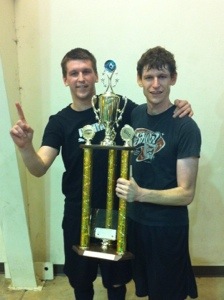 You might not believe it now, but me and my older brothers (your dads) considered ourselves athletes back in the day (I used to be able to throw a pigskin a quarter mile.) You’ve heard our interest in European soccer, so you can guess that the beautiful game was our first love. Collectively, we passed along the nickname “Z” on our high school soccer team for more than a decade, scoring goals and shutting down attackers along the way.

Was it our blazing speed or imposing physical stature that led to our success on the field? No. But we had a secret weapon: A lifetime of spontaneous play. One of my earliest memories is playing stairball in our childhood home. We would stand at opposite sides of the staircase and launch a foam ball at each other until we broke something and Papa shut us down. When the weather cooled, we moved to the back yard and practiced kicking a pool inner-tube over our cable line (hindsite 20/20, I stand by that game). When my older brothers got too cool for childish activities, I figured out how to throw a frisbee and make it come back like a boomerang. I realize how lame that sounds, but at the time it didn’t matter. I was playing.

That’s why it’s so great to see what bursts out of your collective playful imagination when we’re together. The other day, your free-flowing lawn time morphed into a game called “Catch the Twos.” The premise: I’m going to roll these juggling rings — try to catch them. It was simple and captivating like all the best games are. These activities usually don’t make much sense, and no one follows the rules, but you play with the same reckless abandon that your dads and I did growing up.

My brothers taught me how to stay occupied with silly activities, and because of them, I’ve never been bored. As you read this, you might be thinking, “Uncle Mike, I’m way past the stage where I make up games. Blue Ivy’s new single just came out and I gotta get my dance on.” I’m not saying you should start playing with marbles again. I’m reminding you that it’s in your blood to find joy in the little things. Whether you fill your days with books, music, sports or any other constructive activities, I hope you go at it with the same imagination and spirit that I saw while you were growing up.

If you want to know more about our glory days on the field, don’t hesitate to ask. I plan on spending your formative years embellishing all my greatest athletic moments.