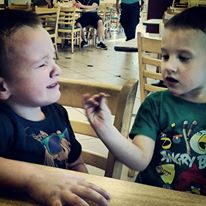 Language is a touchy subject for most people. There are taboos regarding the historical connotations of a plethora of words in our language. Most people have a word, or several, that they get offended by, either by itself, or depending on its context. Some claim to have no qualms about any societal linguistic maledictions. These people are either 1) liars, 2) unemployed, 3) attention seekers, or 4) stand-up comedians.

I don’t get bothered much by the language people use. I say “much” because there is one word that, in the right context, causes my blood to boil and my teeth to grind. It’s a word I never want any of you to abuse, and hopefully, if I raise you right, you won’t.

This word… this four-letter word that starts with an F, is something I almost can’t bring myself to type.

The word is… FAIR.

Now, before I go banning this word from our house like a Texan burning a science textbook, I have to admit that there are a lot of definitions of the word “fair,” and most of them are perfectly acceptable. Here are some examples:

1) Legitimate under the rules. Since I am establishing the rules for the use of the word “fair,” this would be a fair use of “fair.” See what I just did? (Takes a bow).

2) An archaic way of describing a classy lady. When will you use this? No idea. I also can not guarantee your safety if the particular lady you use this on disagrees with the complimentary nature of the outdated term. At least you’ll be able to find out how fair she really is.

3) Moderately large. As in, I am providing you with a fair amount of definitions for the word “fair.”

4) Neither excellent nor poor. You know, because people just don’t like to say “average.”

5) An exhibition. As in, the State Fair. Looking at the definition above this one, it’s possible the name fair is derived from the fact that this is neither an excellent, nor poor way to spend your time. Ferris wheels are overrated.

The definition you must absolutely avoid tapping into is this- Fair (Adjective): free from bias, dishonesty, or injustice.

Fairness is one of life’s greatest, and most distracting myths. We are guaranteed nothing. I know it’s a terrible cliché, but life isn’t fair. We can strive for justice, but even that urge comes out of the imbalances that cause cultural, biological, economical or institutional unfairness to exist. When one of you gets an ounce more of ice cream for dessert, or 2 minutes more playing video games, that’s not proof that your parents are unfair- it’s just a inconsequential microcosm of larger imbalances- like kids not having the means to have the dinner that precedes the dessert you’re throwing a fit about.

As humans, we are always looking at those around us, analyzing what they have that we might not, and striving to “get ours,” as if we’re entitled to what other people attain. Some people are just luckier. Or more ambitious. Or more opportunistic. Either way, to convince yourself that your happiness is determined by an equitable share of worldly possessions is a road I don’t want any of you going down. Pay no attention to what is, or isn’t “fair.” Just be thankful for what you have, and humble about any comparative excess. Even worse than those consumed by what may, or may not be fair, are those who refuse to be gracious about the random genetic lottery we are all a part of. Some day you’ll hear someone like Donald Trump laud those who pull themselves up by their bootstraps, all while ignoring that some people are born into sandals, not boots. Don’t be that guy.

Under no circumstances expect me, or anyone else in this world to concern ourselves with your connotation of fairness. We will let you down, and that disappointment will kindle a fire that will consume and destroy whatever potential you have to be a truly satisfied person. If you obsess over what is, or isn’t fair, you’ll miss out on so much beauty. To embrace the unfair is to understand grace. To feel comfortable in your blessings is to be free from the tyranny of guilt. DO fight for justice. DO practice humility. Know satisfaction.