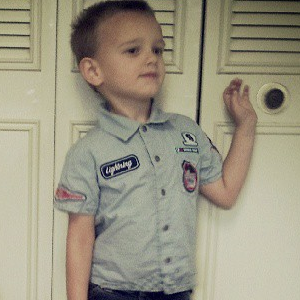 Your middle name was borrowed from a poet named Wilfred Owen, who famously wrote “…My friend, you would not tell with such high zest, To children ardent for some desperate glory, The old Lie; Dulce et Decorum est Pro patria mori.”

You’ll come to know Memorial Day as a three-day weekend that officially kicks off summer, but it’s designed to a be a day of remembrance toward those that have died while in the service of our country’s armed forces.

There are some pretty standard reactions to this day every year, whether person to person or via social media.

Some people will treat it more like Veteran’s Day, and use it as an opportunity to show gratitude toward all military personnel. They may or may not know the difference.

Some people will barbecue.

Some people will passive-aggressively beat others over the head with reminders that someone died for our ability to barbecue.

Some will remain silent, in sullen memory of fallen loved ones, or in anxious limbo over deployed loved ones they hope to have opportunities to barbecue with in the future.

However people choose to express themselves on this day, you need to let them be.

Personally, I hate war. I’m sure most people do. There are intricacies and complications that aren’t really productive or appropriate to get into when writing to you about our military involvement around the world, but know that if I had my way in this modern era, we’d never send anyone else’s kids off to risk death. Add it to the infinite list of reasons I’ll never be president.

When the time comes, you might be tempted to join the military. If that’s what you want, I will support and be proud of you. The amount of bravery and self-sacrifice it takes to live that life in early adulthood is inspiring. I’ll also be scared. The majority of the casualties of the simultaneous wars our country has been in over the last decade were 20-21 years old… just kids.

It’s been 71 years since Congress actually declared war, but over the last several decades our bravest have risked everything knowing they would likely be sent into harms way to do what a select powerful few think is best for our interests. Korea. Vietnam. Israel. Grenada. Panama. Kuwait. Afghanistan. Iraq. Whether it was for our freedom, our safety or our ideals, you should always appreciate the sacrifice, but here’s hoping a time comes soon when it’s no longer necessary.

The line in the poem above, “Dulce et Decorum est Pro patria mori,” roughly translates from Latin to say “It is sweet and right to die for one’s country.”

It isn’t sweet. It isn’t right. It is, however, worthy of a solemn day of remembrance spent around those you love.

I love you buddy. Let’s go eat some barbecue.