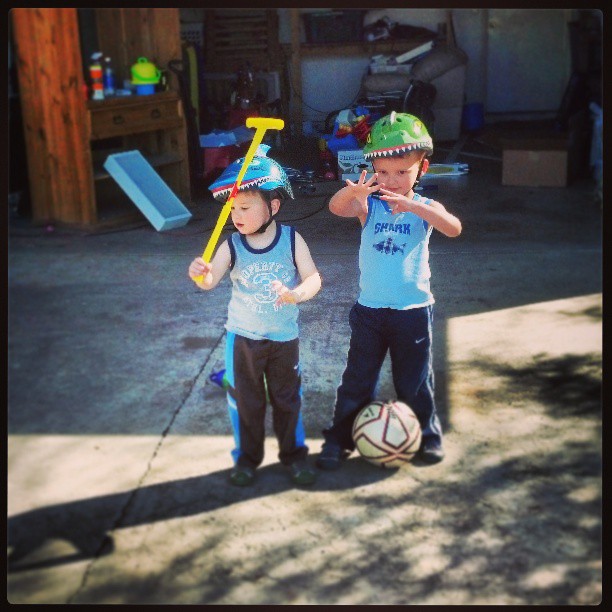 You’ve always picked on your little brother. For the first couple of years, you didn’t seem to get along with each other much. It actually worried me how often you’d push, pinch or prod him into a fit of rage. Then, one glorious day about six months ago, Jett fought back. Now, for some odd and inexplicable reason that exists only as sacred code in the DNA of the human male, you’re best friends. Like any good friendship amongst young boys, your time together revolves around imaginary violence aimed at imaginary villains- and often morphs quickly into real violence aimed at each other.

I don’t like it, but I can stomach your frequent wrestling matches with your own blood. What I can’t handle is when any of that roughhousing carries over outside of the home, or involves anyone else’s children. Unfortunately, this week you’ve gotten into a couple of shoving matches at preschool, and it’s caused the desperate introspection that only a parent knows when looking for a solution to a sudden change in behavior. We usually end up exasperated and feeling sheepish, grasping for straws to help you avoid the line in which your actions become your reputation.

Your mother bought a book called “Hands are not for Hitting.” We’ve read it a few nights in a row… it seems to be working.

I don’t want you to read this and feel any sort of guilt about a part of your life that is long in the past. Instead, I just want to share experiences with you that help you understand why we put the energy that we do into helping you become a kind, respectful boy that understands the responsibility that comes with choosing to redirect conflict when it comes a-knocking.

You’ll probably hear a lot about bullying as you enter school-age. It’s a hot topic right now. Specific definitions of what bullying is vary- essentially when someone forces another person to feel unsafe in any setting, they’re bullying. Thresholds for “feeling safe” will vary, and how you can act with/toward one person shouldn’t necessarily govern your interactions with another.

Bullying happens when teasing escalates to harassment. Teasing provides a gateway into bullying, but on it’s own, teasing isn’t all that bad. I believe every kid needs to figure out on their own how to handle a few jokes that exploit insecurities, and function in spite of that.

I was bullied as a kid. Don’t get me wrong, as your father I am every ounce of the indestructible superhero that you believe me to be, but I was a kid once too. There’s this misconception amongst those who have been bullied that their right to share their story about bullying ceases once they are made aware of more serious cases of bullying. I’m not trying to compete with anyone, I know some people who certainly had it worse than I did, and I know people who I felt had it relatively easy by comparison, but were as deeply impacted by their experiences with bullying as I was, if not more.

I won’t get too into detail, but the height of me feeling bullied came around age 11. We lived about a mile from the elementary school that I attended, and the walks home were uneventful most afternoons. However, on the rare day that I crossed the wrong person’s path, things could go south in a hurry. I would have liked to get a ride home, especially considering my sister and brother, who attended the same school, were driven home by my stepmother every day. At the time, my priorities were such that I felt 90 seconds in the car with my family was less comfortable than dodging bullies on foot for 20 minutes. One day, when walking with my head down and attempting to ignore the insults of classmates, I was grabbed and held down by two fellow 6th graders. In an amazingly effective attempt to crush my self-esteem, they held me in place while a mentally unstable 2nd grader, ironically named Angel, repeatedly punched me in the face. They had offered him a candy bar to participate in their plan, and he gladly accepted. The next day, when I showed up at school with swollen lips and eye-sockets, they told everyone that I had lost a fight to an 8-year-old.

There really wasn’t anywhere I could go with that story for support. Basically, anywhere I would have gone with that information would have involved me audibly describing myself getting pummeled by a midget, and I was ashamed. My close friends would have immediately started scheming about how they could film a Saturday Night Live-style skit about the incident, because they were jerks. My dad would have been embarrassed, and probably tried to “toughen me up.” I was boxed in, so I swallowed the experience and did my best to move on.

If I could ask you for one thing, aside from asking you to not be a bully, it would be to have a heart for those who are bullies. People who are hurting inside are typically the ones who hurt other people the most. Have consideration for the insecurities that cause aggression in others. To match vitriol with vitriol, and violence with violence to “get even” with someone ignores the fact that you were above them in the first place. You have to lower yourself to get even with a bully.

Don’t ever lower yourself for anyone.